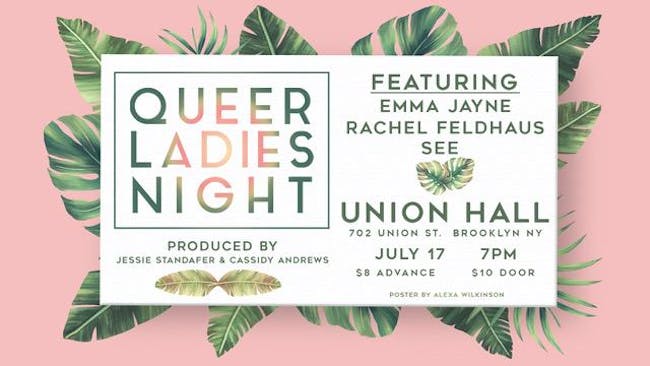 Lesbian Singer/Songwriters Jessie Standafer & Cassidy Andrews have curated a night of music presented exclusively by Lesbian, Bisexual, Trans, and Queer women, and we want you in the room. Come and be part of the queerest thing to hit Brooklyn's Union Hall!

SEE is a queer, alternative pop vocalist, who uses the medium of music to display and inform that blackness and womanhood is never a monolith. She is an Artist-In-Residency with Judson Church that is being used to adapt a musical she is currently writing.

Emmy nominated composer Emma Jayne has appeared everywhere, from Coca Cola ad-campaigns to Justin Bieber fragrance commercials. Her latest single, "Morning," premiered exclusively on Pride.com and can be heard anywhere you listen to music. For lovers of Carole King, Sara Bareilles, and laughing until you cry.

Rachel Feldhaus is a multi-instrumentalist originally from West Virginia. She has performed in symphony orchestras, chamber groups, pit orchestras, and European music festivals in a career spanning two decades. Rachel has performed with a variety of world music ensembles as well, including West African drumming and dance, Japanese taiko drumming, and Indonesian gamelan. These collection of experiences dovetailed into the appreciation of other artistic mediums, evident in her photography, painting, writing, and composition. She is half of the Parisian/Sydney/American-based surf rock band The Everly Ills. Currently based in New York City, she plays with the String Orchestra of Brooklyn. She is writing her own solo album with a projected release this year.