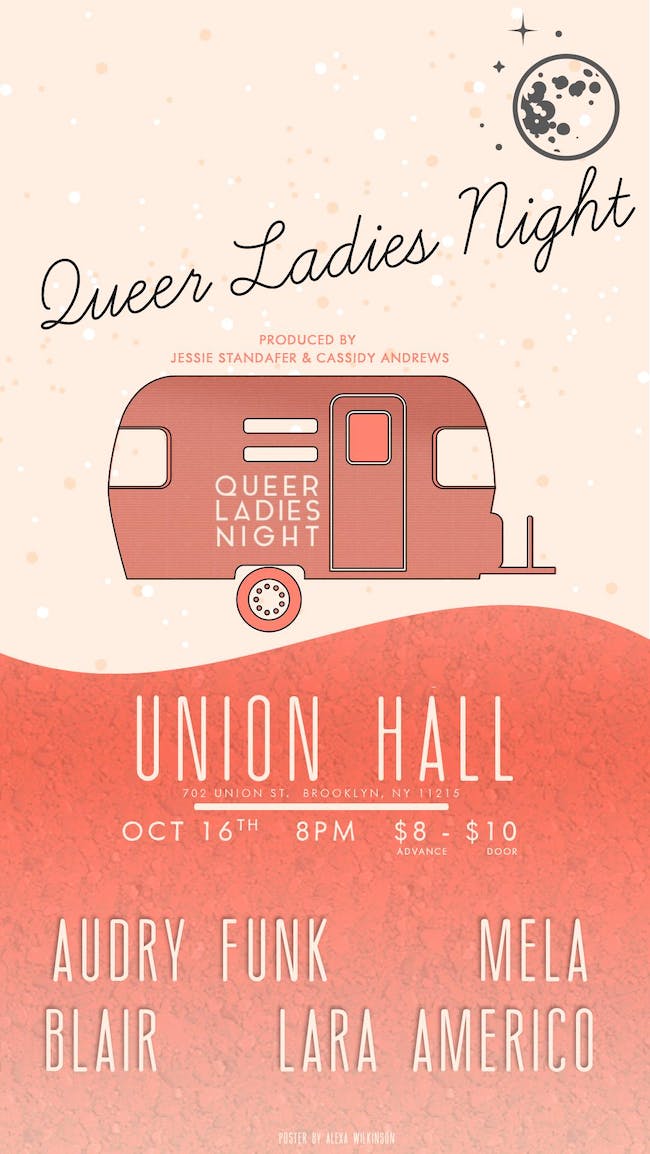 Lesbian Singer/Songwriters Jessie Standafer & Cassidy Andrews have curated a night of music presented exclusively by Lesbian, Bisexual, Trans, and Queer women, and we want you in the room. Come and be part of the queerest thing to hit Brooklyn's Union Hall!

Audry Funk is an Mc, singer and activist. She has been expressing herself since 13 years old. She is very well known within the reggae and hip-hop scene. Audry also organizes forums and workshops to aid youths in poorer and dangerous communities. At the same time, she uses hip-hop as a form to promote peace. Involved in other projects, Audry Funk is a part of Mujeres Trabajando which is a collective formed by other women mc’s, break dancers, graffitti artists from all over Mexico. Somos Guerreras is another collective that Audry has formed part of, along side other women in central America where they were able to film a documentary about the lives and hardships of women in central america involved in the Hip-Hop movement.

MELA, also known as Megan Elise Kelly, hails from the East Coast as a indie-pop Singer and Songwriter. Megan is well known for her writing in film, advertisements and television. After releasing a few singles under Megan Elise Kelly, her team helped her decide that a new name was needed for her solo career. And from there birthed MELA. MELA’s sounds are reminiscent of Dgny, Verite, and even Lykke Li. This indie-pop singer has surely proven that her vocals and lyrics are some that will not be bypassed.

Blair graduated from Texas State University in May 2018 with a BFA in Musical Theatre. In 2014, she was nominated for a Tommy Tune Award (Best Leading Actress), where she received the honor of performing with Tommy Tune himself. Blair went on to spend a summer in Los Angeles writing and performing in venues such as The Kibitz Room and The Viper Room. She now performs with her new band BABE around NYC including Rockwood Music Hall, Otto’s Shrunken Head, and more.

Lara Americo As a TEDx speaker, voice of the ACLU’s Change.org campaign and contributor to The Washington Post, NPR, Rolling Stone and Democracy Now!, Lara Americo talks about social justice for queer and trans people of color. She’s the founder of the nonprofit Comic Girl Coffee + Books, an inclusive safe space for queer and transgender people located in Charlotte, NC.